Published by Anoop Hullenahalli on 9 Dec ’06

Kyle of Lochalsh: Again a late morning; it was around 11:00 by the time we finished breakfast and checked out of our rooms, no one had a sense of urgency; after all we were here to relax not to do haste. It was just unfortunate that the room we were put up didn’t have a view, though the B&B was right next to the shore.

A real treat to be able to see such a fine sight every morning of ones life.

The Bridge for ‘Isle of Skye’ was just a mile or two away from the B&B, as we hit the road towards Skye; there it was, like an arch jumping from this side of the land towards the island, not huge, but something about it was very different. Unlike other bridges which are flat, i.e. which maintain the same elevation this one was arching attaining a height greater than the land on either side of which it connected. When we were right at middle of the bridge, also the highest point of the bridge, Kyle of Lochalsh, with mountainous terrain behind and bordered by the sea looked like anyone’s dream holiday destination.

Isle of Skye: Right as we entered this Island we were treated to a rainbow, as it had just stopped raining not an uncommon phenomenon. As we kept on driving we could see this rainbow constantly, sometimes jutting from right behind a mountain or arcing across the road. It was still very cloudy for the entire rainbow arc to be visible. We finally decided to park our car and take some pictures of the rainbow at a place called ‘Broadford’, the parking lot was right next to the sea in the same direction as the rainbow. Just as we parked our car the rainbow arc completed, arising from behind a couple of houses on one end and dipping into the sea on the other. I could take a panorama shot of the entire arc, but unfortunately, the stitched photo does not have the same effect as the real thing. After a while a second rainbow arc was about to form, outside the circumference of the first arc, a bit hazier not very sharp…

If only we had the time to wait, in whatever little time available the best picture I managed:

The second rainbow arc is faintly visible for the discerning eye! 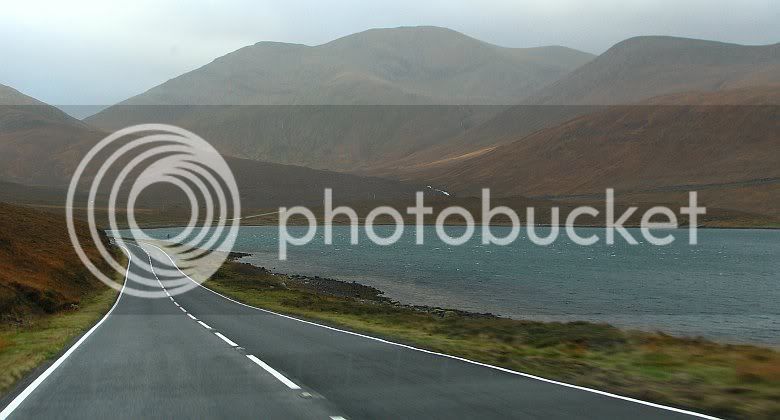 Portree:
As the clouds shifted the Sun rays swept across the bay:

Next to the road there was this waterfall, what was intended to be just a short stop became yet again a trek. We climbed to the top of this falls, not a big one by any count but the climb was very slippery because of the slippery grass with water and the strong winds. The gale was even stronger at the top and could have cleanly swept a much much lighter person off his feet. Luckily it was not very cold; around 7 deg C. During the climb down the falls, one of my friends fell into the small stream, fortunately not hurt, but completely soaked. He took with him two digital cameras and one mobile phone into the water, the digital cameras are fine, mobile phone yet to recuperate. 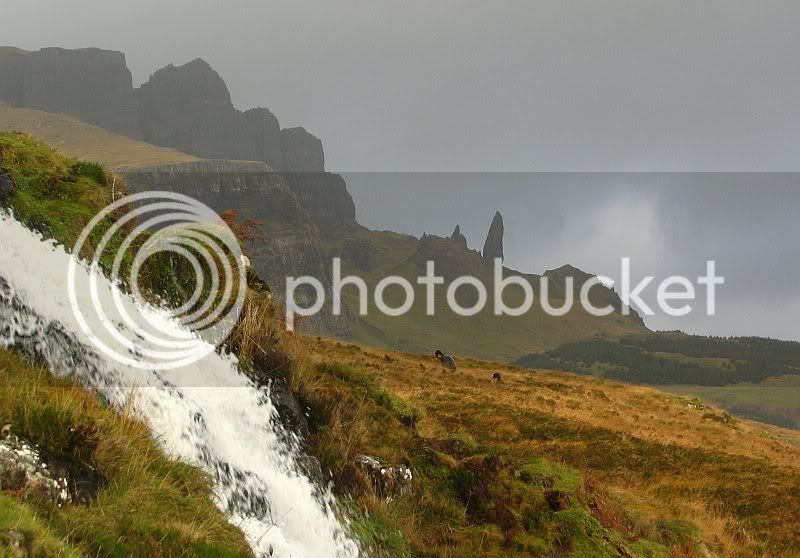 We did the circuit of the top portion of this Island. The circuit took us to the northern most portion of Skye and back again towards Portree. As we had bought some sandwiches earlier that morning, parked the car at a nice spot keeping the sea in view and had our late afternoon lunch. From here our intention was to try and cover distance towards Inverness, next days destination.

From here, drove all the way to Invergarry and settled down for the day at ‘Invergarry Hotel’.

>Red Hills : I like the image per se, but not the ellipse. I realise you have cropped out bits of the image which include the car’s dashboard, windshield etc. But, I don’t think that’s necessary.

Storr : The lone standing menhir is purportedly known as the “Old Man of Storr”.

Great shot of the Eilean Donan. I couldn’t do that sorta angle, or that sorta lighting. Were you on P mode ?

One final thing – We must have a map in. I’ll supply that.

>gopal: I have removed the elipse shaped crop done for the ‘Red Hills’ photo, as you can see the intention was not to mask out the reflection of the car’s dashboard but to crop out the blurr of the road as a result of relative movement. Also updated the ‘Portree’ snap by the sanp you provided, as is evident, even this is no way close to the real thing.
Eilean Donan: used Manual mode with large aperture (shallow DOF) and focused to the castle (using autofocus)
I can upload the map for the fourth and last post of Scotland Trip.

>Your photos leave me breathless… simply mesmerising! Second one with highway is really inspiring. And the one with the grass in the foreground (Kilt Rock) looks so peaceful and relaxing.

One good double rainbow deserves another 😉

Why is the sky brighter inside the rainbow? – Light Inside the Rainbow

Date: 14th November Place: Scotland ‘Invergarry Hotel’: I would strongly recommend the hotel for travelers visiting this side of Scotland. Well located – right in the middle of the woods, with a stream flowing just Read more…

Date: 12th November 2006 Place: Scotland Rynee Mar B&B, Stirling: It was 08:00 and the Sun was lazier than us. The South Eastern sky had that ‘fiery orange’ colour, the colour of sunrise (my favourite Read more…