Published by Anoop Hullenahalli on 26 Nov ’06

Rynee Mar B&B, Stirling: It was 08:00 and the Sun was lazier than us. The South Eastern sky had that ‘fiery orange’ colour, the colour of sunrise (my favourite colour). Pair of Factory chimneys, maybe of a Coal power plant, were puffing out smoke in the distance. Even birds, fooled by the late sunrise were starting to fly out of their nests.

After having a multi-course breakfast! Cereals (Crunchy nuts), toast (with marmalade and butter) followed by Veg-sausages, we were ready to start our day.
Public path to the “Falls of Leny”

Didn’t make it to this falls.
Lonely rider:

Nature was presenting itself in all shades of Green, Orange, Brown and Yellow – for the Oriental eyes, a festival of colours. We went past the first “Loch” (Scottish word for Lake) in our journey – Loch Lubnaig. Another hour of driving, we were at Glencoe.

Glencoe – Devils Staircase: Glen = A narrow secluded valley. This place is famous, or rather infamous for the massacre of MacDonald’s by another clan, namely Campbell’s. We were told that one can still feel the unfortunate event when they drive through this stretch of the valley. 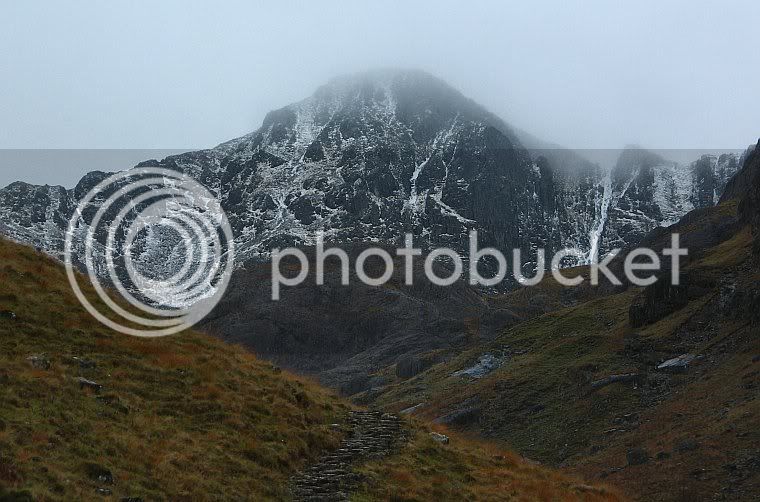 The peak was still more than 2 hours of climbing; we were not prepared for this kind of adventure nor was the sunlight with us. It was going to be dark in less than 2 hours, and we still had to have lunch.

The other side of the valley:

It was 16:00 by the time we finished our lunch, too early to retire for the day; so we decided to travel as far as possible towards the “Isle of Skye” – our next destination. A quick query in our very low detailed road map told us that there were some vaguely familiar and vaguely heard of places close to Skye, like: Shiel Bridge, Inverinate, Dornie and Kyle of Lochalsh. It took us another one and half hour of driving in the lashing rains to reach these places shown on our map. Now, every time we came within the town limits everyone inside the car would search desperately for any kind of B&B (Bread and Breakfast) boards put up on roads. There were some B&B’s outside the town limits far away from the main road, I guess nobody had the courage to even try this option. Anyway around 18:00 after passing through the third or fourth consecutive town without finding a B&B my driver friend got a bit concerned, especially as the driving had become a bit difficult because of the rain poring down, also as we were about to cross over into ‘Isle of Skye’ we were not sure of our chances of coming across a B&B on the Island were better. So we decided that we will not cross over into the Island that day and try to find some kind of B&B in the mainland of Scotland, as we did, in a place called ‘Kyle of Lochalsh’. This town is right at the threshold before we cross onto the Isle of Skye. How beautiful this place was, we were only to find out the next morning, meanwhile we had the whole evening to waste away.

>The first snap pretty much epitomizes southern Scotland. The crimson sunrise, the lonely bird and the stand of conifers at the back represent nature, while the plumes of smoke and the chimney-stacks represent their third-worldish (over-)reliance on coal-power.

>gopal: you have any pics taken from your camera that have come good? do put them up as a link with ur comment, i.e. if you dont have a problem of giving this blog extra publicity. :p.

basanti: we were not lucky enough to view a sunrise, though. the clouds covered up the horizon in a while. but, we did have a excellent breakfast later!

>Great photos – as always! 1st and 2nd are exceptionally nice and need no mention, but it is the 5th photo that deserves accolades. The sobriety of the background makes the symmetry hard to notice, but I think it is one of most symmetrical photos you have taken.

The subtle shift of the frame’s colours from relatively bright patterns in the foreground to the dull ones later on makes it look like one of the frames from Lord of the Rings! Truly outstanding!

And the natural stone stairway adds to the effect! A class act!

>I wish I had a camera like yours. The day I get one I surely will try my hand at photography – your efforts are really awe-inspiring!

>keshav: thanks for your generous praises.
I can never express in so many words what I actually like in the photos i click seemingly effortless – This is one of the main reasons i present the photos in a blog. comments like yours are really helping me complete my own comprehension of why I like a particular photo, thanks for your comments.
hey, Im sure you can get hold of a camera better than the one i have and start fulfilling your dream :p.

>The panorama is … too scrunched up. Can you make it a bit larger ? Say about 500 pixels high ?

At the Kyle : Wasted away the evening, and how. Beating the stuffing out of a geek, rambling on about cheap labour, creeping two girls out and greeting a complete stranger in a thick Scottish accent, in lashing, freezing rain.
Oh yeah, I’d give a week of my life to do it again.

Keshav : The camera is definitely a good one, but the man manning it is tops too!

>gopal: the original glencoe panorama after stitching was much bigger, couldnt upload that thru any of the image hosting websites.
at the kyle – i remember the beating, rambling and creeping parts, but i dont seem to recall greeting a stranger.(scratching head… :p)

>The Photographs are wonderful,

>Hi, your photos are great. From where did you rent the car in Scotland? I am also planning to rent a car to drive through Scotland, England and Wales.

>-Harsh: Thanks. there are many car hire’s available, the most noted among them being ‘Hertz’. If you can rent the car well in advance you will get a very good deal. Happy traveling.

Date: 14th November Place: Scotland ‘Invergarry Hotel’: I would strongly recommend the hotel for travelers visiting this side of Scotland. Well located – right in the middle of the woods, with a stream flowing just Read more…

Date: 13th November 2006 Place: Scotland Kyle of Lochalsh: Again a late morning; it was around 11:00 by the time we finished breakfast and checked out of our rooms, no one had a sense of Read more…